You won’t have to wait until 2021 to see the next chapter of the Jurassic World story, because a new short film is coming to TV in just a few days.

Colin Trevorrow, who directed 2015’s Jurassic World and is returning to the director’s chair for the upcoming Jurassic World 3, announced that a live-action Jurassic World short film called Battle at Big Rock is debuting on FX this Sunday, September 15, 2019. See the full teaser poster below. 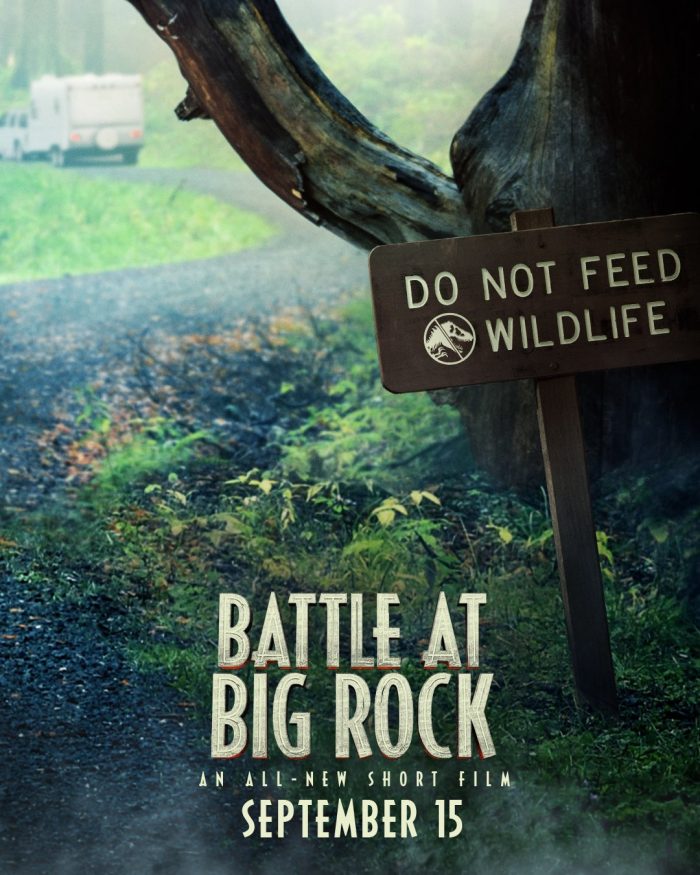 After sharing that poster with the caption, “These creatures were here before us. And if we’re not careful, they’ll be here after,” which is a line from Jeff Goldblum’s Ian Malcolm in Jurassic World: Fallen Kingdom, Trevorrow provided a few extra details on Twitter:

The vehicle in the poster doesn’t look like one that would be on Isla Nublar or any of the other Jurassic Park islands, so my guess is that this short is set after the events of Fallen Kingdom, when dinosaurs were released onto American soil. I’m thinking this short could involve a family who encounters them in the wild and has to fight them off to survive – an idea that’s cool and worth exploring, but maybe a bit too small to get into in Jurassic World 3, which may not have room for non-essential encounters like what I imagine this could be.

It’s unclear at this point if Trevorrow is directing this short, or just co-writing alongside Emily Carmichael (who co-wrote Pacific Rim Uprising and is also co-writing Jurassic World 3). As for his other collaborators behind the scenes, Larry Fong is a skilled cinematographer who’s shot movies like 300, Watchmen, Super 8, and Kong: Skull Island, among many others, and Amie Doherty is the composer of the new Amazon series Undone.

I can’t think of another time that a major film franchise has ever aired a short film on TV like this. The closest thing I can think of is the much-reviled Star Wars TV special (which isn’t really the same thing), or the shorts set in the world of Alien: Covenant and Blade Runner 2049 that accompanied those recent films’ releases – although those were only released online, not on television.

As for why NBC Universal would want to debut a short of one of its biggest film franchises on a rival network like FX? I don’t know the ins and outs of that deal, but the original Jurassic World is already scheduled to air at 7:20pm ET/PT this Sunday night on FX, so Battle at Big Rock will almost certainly be attached to that.

Our friend Frosty will have more information tomorrow over at Collider, so we’ll update this post accordingly.

If you’re a fan of #JurassicWorld, a Jurassic short film (‘Battle at Big Rock’) is airing THIS Sunday night on FX.

First poster is below.