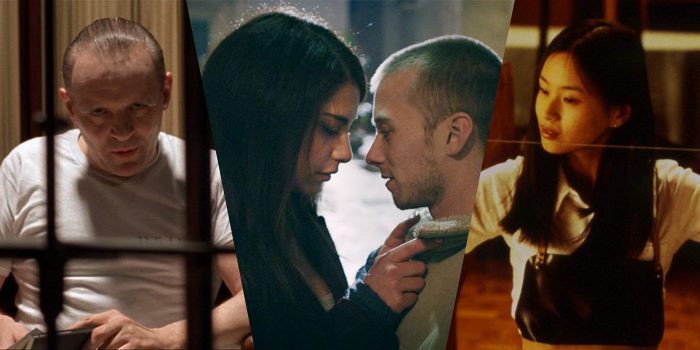 (Welcome to Now Scream This, a column where horror experts Chris Evangelista and Matt Donato tell you what scary, spooky, and spine-tingling movies are streaming and where you can watch them.)

Matt: If you’re venturing out to the cinema this Valentine’s Day weekend and can catch a screening of After Midnight, I urge you to do just that (or watch it on VOD). Between all the other obvious date night choices – looking at you Sonic The Hedgehog – none understand the beauty of love and complexity of emotion on a more honest scale. That and it’s also about monsters. You’re here for horror picks, and I gave you a bonus because the holiday spirit is alive, my friends. That said, if you’re staying home this V-Day with takeout and a streaming movie, we’ve got you covered there as well.

Chris: Happy Valentine’s Day week, screamers. I hope you’ve all remembered to buy your significant other a card, at least. If not, maybe get out there and get one. Or just make one. All you need is construction paper and a big marker. Yeah, that’ll do the trick. And if not, why not recommend some streaming horror movies for your loved one? Say, “Baby, I love you so much, I want to watch these horror movies with you.” Swoon!

Matt: Is there anything sexier than Tom Atkins in a massively gory slasher remake? My Bloody Valentine (2009) is the most fun I’ve ever had in a normal movie theater setting, as my Friday night screening devolved into a raucous midnighter by virtue of content alone. This movie cuts your heart out and serves it on a silver platter (quite gruesomely), while also allowing Jensen Ackles a chance to color outside his normal performative lines. It’s not the sharpest pick-ax in the mine, but for my money, a worthy watch for couples who crave a quintessential Valentine’s Day massacre (and have already seen the original).

Chris: Lots of gory fun here, and plenty of scenes featuring my favorite kind of 3D cliche: Stuff FLYING DIRECTLY AT THE CAMERA. Look out!

Matt: Is there anything more chivalrous than Micah Sloat‘s undying love for Katie Featherston in Paranormal Activity? Sure, it may be one of the reasons Toby gets so angry and aggressive, but no underworld demon is gonna possess Micah’s woman! Well, or so he hopes, which we know goes helplessly awry. It’s a valiant white-knight effort, Micah. All those dude-bro aggression and threats towards a blanket-hog demon. If only Cupid’s arrow could pierce and slay entities who do not appear to the naked eye.

Chris: This movie still holds up. The many sequels? Ehhh, not so much. Still, it’s crazy to think that from this tiny little film, Blumhouse sprung forth.

Matt: Colm McCarthy‘s Scottish werewolf tale about young love is everything Valentine’s Day is about. Forbidden romance, beastly awakenings in fits of passion, Celtic black magic partners who hunt and slay together. Outcast features supporting appearances by Kate Dickie, James Nesbitt, and Karen Gillan, but leading charisma between Niall Bruton and Hanna Stanbridge is what drives home adoring chemistry. As their heartstrings intertwine, bodies pile up with the appearance of some nightly creature stalker that represents more than a simple horror monster. As an indie representation of love in all its forms and what “dangers” such emotions can unleash, Outcast is more than those ho-hum riffs you’ve seen pounded out countless times before.

Chris: I could make an extremely dated “Hey Ya!” joke here, but I won’t. Anyway, I haven’t seen this.

Tammy And The T-Rex

Matt: You wanna talk about true love? How about having your brain transplanted into an animatronic dinosaur and not scaring your girlfriend away. Yes, you’ve read those words in the correct order. Tammy And The T-Rex is about Paul Walker‘s quest to return his squishy cranial tissue into his human body, while currently powering a mechanical dinosaur prop that schoolyard crush Denise Richards still loves with all her heart. Such tender moments between a rubber Jurassic stage prop and an inspiringly committed Richards, as mad scientists are crushed into bloody pulp in the name of unstoppable romance (John Carl Buechler‘s work). This movie is a rare trashterpiece that also works as an unexpected recommendation for couples, so how can I resist? Come for the possessed Tyrannosaurus, stay for the slapstick mortuary sequence when trying to find a new flesh sack for Walker’s thinking muscle – only a fraction of the weirdness at hand.

Chris: This is in my queue, and I’ll get around to it sooner or later! How can I resist?

Matt: I may have recommended Spring in the past, but consider this your yearly reminder that Justin Benson and Aaron Moorhead have cornered the market on “love is a monster” storytelling. Lou Taylor Pucci and Nadia Hilker are divine in their romantic Lovecraftian attraction, embracing the madness that is everlasting devotion. Looking someone (or something) in the eyes and accepting their flaws is so powerful, especially given the alarmist narrative Benson and Moorhead explore. Spring is required Valentine’s Day viewing for genre fans worth their salt. I’ll be back here year after year saying the same ding-dang-doodly thing until every last one of you watches this perfect ode to untamable feelings. I suggest you listen.

Chris: A stone-cold classic. Such a sweet, romantic, unique film. Love it.

The post Now Scream This: The Best Horror Movies to Watch on Valentine’s Day appeared first on /Film.